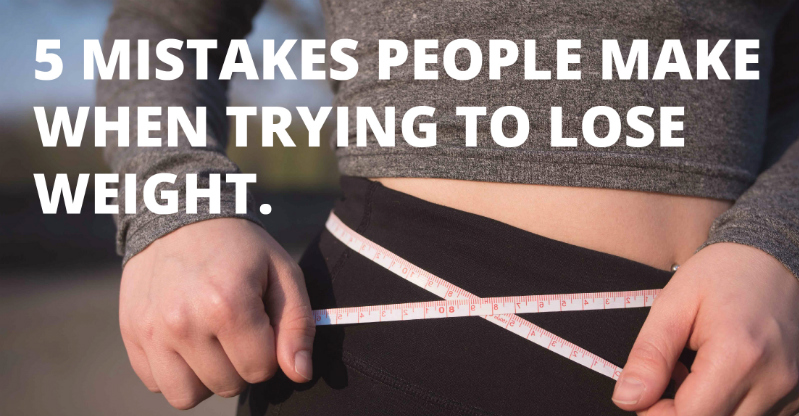 Like many other people, you have likely tried time and time again to lose weight with little to no success. You may feel discouraged and wonder what’s the point in even trying. While you’re not alone in these frustrations, there are a number of common weight-loss mistakes that, if avoided, will greatly improve your chances of success.

Stocking up on diet-food products is one of the surest ways to fail in your weight-loss mission. Eating ‘low fat’ food products may seem like a no brainer – but don’t be fooled. To compensate for the fat that’s removed, other ingredients are added to make the food taste like its full-fat counterpart.

These added ingredients don’t replace the lost nutrients, however, so you start craving more food, even though you’ve just eaten. Even with the best of intentions, you may end up eating more calories than you would have if you’d just eaten the full-fat version in the first place.

Sugar is another culprit in low-fat ‘diet’ products. Even foods generally considered healthy, such as yoghurt and tomato sauce, are full of extra sugar, resulting in more cravings and usually more consumption.

In fact, a 2014 analysis by The Telegraph found that a particular ‘low fat’ meal contained almost six times the sugar levels of its equivalent full-fat dish. (1)
What’s more, low-sugar ‘diet’ food products often replace sugar with artificial sweeteners – such as Aspartame, which has been linked to headaches and weight gain. (2)

While drastically cutting calories or skipping meals may seem like a quick fix for weight loss, under-eating can actually sabotage your efforts to shed those extra pounds.

While an effective way to lose weight is to consume fewer calories than you expend, a sharp and drastic decrease in calories risks sending your body into starvation mode. When this happens, your metabolism slows to a crawl, burning calories as slowly as possible to conserve its energy stores. This is why people who cut out too many too quickly often reach a plateau and stop losing weight.

Eating too few calories can be the start of a vicious cycle that causes diet distress. It’s easy to become frustrated when you stop losing weight, making you liable to give up, overeat and ultimately gain more in the long run.

Top Tip: Reaching your weight-loss goal rarely comes quickly or easily; if you want to achieve sustained results. adopt the motto ‘slow and steady wins the race’. This means reducing calories to a sensible level and setting a steady weight-loss target of 1-2 pounds per week.

Many popular fad diets instruct people to cut out entire food groups, such as fats or carbs. Carbohydrates in particular have been crucified as a key cause of weight gain, with no-carb diets becoming all too common. While it’s true that refined carbohydrates like sugar and white bread can spike blood sugar and lead to weight gain, complex carbs such as wholegrain rice can in fact help you lose weight.

Another major concern in eliminating entire food groups is the risk of developing nutrient deficiencies, such as a lack of fibre or protein. Unless you have an actual food allergy, be wary of embarking on any weight-loss plan that requires you to ditch important staples of a healthy diet.

Top Tip: Instead of cutting out entire food groups, try swapping out specific unhealthy elements of these groups for healthier alternatives. For example, replace white bread, pasta and rice with their wholegrain counterparts; swap the unhealthy fats in processed foods with avocados and nuts.

A 2010 study published in The Journal of Sports Medicine and Physical Fitness (3) found that participants overestimated the number of calories burned in an exercise session by three to four times. This error in judgement led them to consume almost triple the calories they burned during exercise.

While proven to be as effective (or even more so) than medicinal treatments for common health problems, including diabetes, high blood pressure and depression, exercise alone is not sufficient in achieving significant weight loss.

So, just because you’ve spent time running or swimming doesn’t mean you can treat yourself to whatever you want. For example, a single slice of pizza can erase an hour’s worth of physical exertion.

Shawn Talbott Ph.D., who analysed more than 700 weight-loss studies, confirms that eating healthier produces greater weight loss results than exercise:
“On average, people who dieted without exercising for 15 weeks lost 23 pounds; the exercisers lost only six over about 21 weeks. It’s much easier to cut calories than to burn them off.”

Top Tip: Trying to compensate for a less-than-perfect diet with exercise is rarely the key to long-term weight loss. However, research does suggest that when you add exercise to a healthier diet, you’re typically rewarded with more sustained weight loss over the long-term. (4) So, prioritise both exercise and healthy eating within your weight-loss plan.

The evidence cannot be argued with: sleeping fewer hours each night leads to weight gain (5).

An interesting study by researchers at the University of Colorado found that in a single week of sleeping an average of five hours each night, participants gained an average of two pounds.

Sleep deprivation triggers changes in our hunger and appetite hormones. The hormone leptin, which is reduced through bad sleep, suppresses appetite and encourages the body to expend energy. Ghrelin, on the other hand, triggers feelings of hunger – and its production increases when you’re lacking in sleep. (6)

Sleep deprivation also impacts the foods you crave (7), stimulating intense cravings for fat- and sugar-rich foods. After poor sleep, your brain struggles to use its best judgment around food, so you’re more likely to be impulsive and give in to unhealthy food cravings.

Top Tip: To improve your sleep quantity and quality, make sure you sleep in total darkness while avoiding blue light from mobile phones and devices for a few hours before bed.

Being tuned in to these common weight-loss mistakes can help in making informed and strategic choices to avoid disappointment, frustration and unnecessary temptation. Although there are no quick fixes on a weight-loss journey, tailoring your diet and exercise plan to your individual needs and goals is a big step in the right direction.